A Moving Story About Food 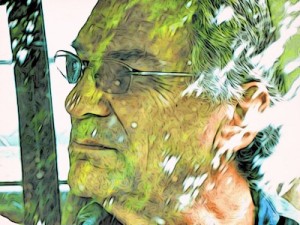 I've written a lot about the shipping industry in this space. Everything from forklifts and pallets to roads. In fact, I write about roads almost more than anything else. One thing I don't write about so much is the actual stuff being shipped.

Shipping fresh food has been a goal of human civilization since…well, always. You can only maintain a certain level of population with food gathered in your local area. Agriculture increases the maximum potential population level, but only up to a point. The ability to ship food from other areas results in even higher potential populations. It also provides a safety buffer for times of famine. If one harvest goes bad, ship a surplus from somewhere else.

For a long time though, there weren't a lot of good ways to ship food. You could transport some grains, spices, and oils in decent ways. Fresh fruit and vegetables, however, were another matter. Meat could be shipped, but only if it was smoked or—more usually—salted.

The downside: these preservation processes resulted in lower nutritional quality. Scurvy was a risk on long sea voyages exactly because of this.

So, the average person's main diet was of food grown very near to him and her—usually within a few hours' walk. For larger distances, livestock had to be moved while still alive; hence those giant cattle drives in the Old West, and railroad cattle cars. 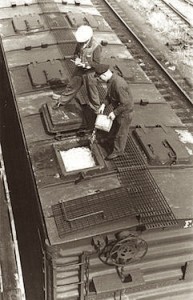 Pouring ice into a railroad car.

The refrigerator railroad car changed all that. Insulated cars had ice tanks at either end, with vents allowing the cooler air to flow into the cars to preserve meat and produce. This rapidly resulted in the practice of transporting various local foodstuffs across huge distances.

One interesting side effect of this is that many of the fruits and vegetables we eat today aren't necessarily the best tasting or most nutritious. They’re the ones most easily shipped and preserved. Many fruits are picked before they're entirely ripe. If you've ever had a ripe peach off the tree, you'll immediately be able to taste the difference. I won't eat grocery store peaches anymore if I can help it.

Pawpaws, a fruit native to the East Coast, are generally agreed to be one of the most delicious fruits you can find. (I can't stand them, but I've never met anyone who agrees with me on this.) Lots of folks use them in place of bananas in their cooking. Why aren't they sold in grocery stores everywhere? They bruise easily and only last a couple of days after being picked before going bad.