Or: Is This Progress? 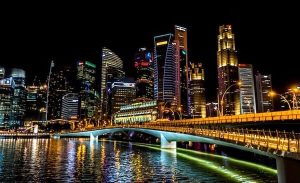 Days of Future Past

I meant to be already retired by now, but HR tells me they’re still looking and can I stay a bit longer, and otherwise they’ll sue me. So, I stay. (I think Maggie is bribing HR.)

The closer I get to that possible retirement, the more books I find myself reading. I’ve always been a reader, though I seem to have more time for it now. If you've followed my blog, you can probably guess I tend toward history, with an emphasis on logistics, architecture, and construction.

My most recent read is Daniel Brook's A History of Future Cities. Despite the name, it's not science fiction. Instead, it's a history of four cities (St. Petersburg, Mumbai, Dubai, and Shanghai) that have undergone rapid Westernization and industrialization by their rulers in an effort to turn them into world class cities.

These “instant cities” all have histories that eerily echo one another. They all seem to have gone through remarkably similar life cycles:

These cities are most strongly characterized, however, by their rejection of the traditional ways of their country.

Each city is, of course, still extremely distinct from one another. Dubai, for instance, has a population that's 97% foreign workers, divided between affluent foreign businessmen and poor itinerant laborers shipped in from other countries and paid a pittance.

Mumbai is surrounded by and interwoven with one of the world's largest slums.

Shanghai disguises all of its poor workers it imports in uniforms and houses them in dorms on the outskirts of town.

Brook does an excellent job exploring the rise and fall of cities in regions trying to rapidly adapt to and join the technological West. The result is that these cities become not just comparable power players but places actually trying to be the West, in a very real sense.

Though A History of Future Cities definitely tends towards the somber at times, it's a surprisingly gripping read.