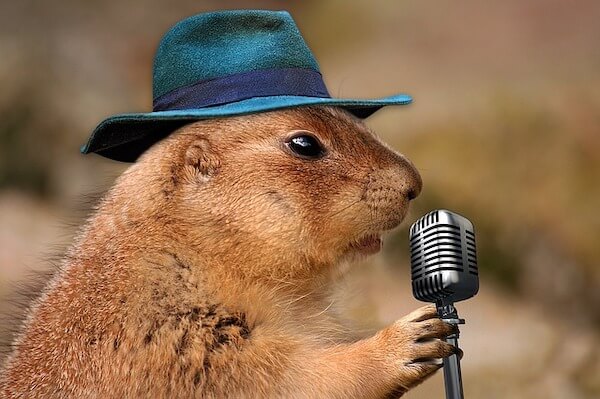 I just scampered in from Jackson Hole, and man are my dogs tired.

Last time around, we looked at animals speaking human language. What about humans trying to speak animal language?

Well, somewhat embarrassingly—and other than some scientifically and ethically suspect experiments with dolphins back in the day—we really hadn't tried too hard until fairly recently. We're looking into it with a vengeance now, and we're coming up with some astonishing results.

First of all, we've got parrots (like Alex) in the wild. We've confirmed they have words for specific types of predators, foods, etc. The most fascinating thing we've found, though, is that they give each other names. Each parrot has a distinct name that remains throughout its entire life, given to it by its mother. That's…pretty astonishing.

Next, we have prairie dogs. (Not groundhogs, I know; I couldn't resist the title.) Prairie dogs live in huge underground communities, and scientist Con Slobodchikoff has been studying their vocalizations fairly intensely over the years.

He's confirmed they have a variety of different danger calls. Essentially, they have words for hawk, human, coyote, and even domesticated dogs. This is quite useful, since each threat demands different responses.

The prairie dogs could identify the difference between triangles and circles, but not circles and squares. The ability to use adjectives like this is far from one expected in a species of rodents.

There are quite a few more obviously intelligent animals in the world than prairie dogs. They’ve got to have even more language, right? (So long as they’re social and not solitary, at least.)

This week, my friend The Yard Ramp Guy continues to honor the beauty of a yard ramp with a terrific perspective on its logistical and economic value.