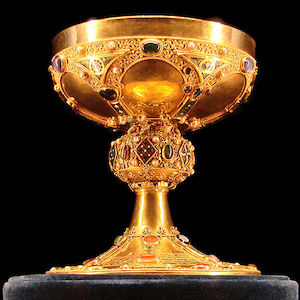 They're not real screws, and they serve no purpose in holding the object together. As it turns out, that's not just an aesthetic choice but something more.

They're called skeuomorphs—“derivative objects that retain ornamental design cues from structures that were necessary in the original.” These are things like fake woodgrain on a station wagon, a volume control panel on a computer that looks like an old school sound system with dials and knobs, or plastic chairs imitating wooden ones.

Ancient Greek stone architecture had small features called triglyphs and guttae that didn't serve any purpose in stone, yet had important roles when the ancient Greeks primarily worked in wood. (They were the carved ends of beams along with the pegs craftsmen used to secure them.) Also, potters mimicked expensive silver goblets using pottery and often inlaid clay pellets to resemble the rivets in the metal ones.

Though skeuomorphism has obvious applications in design, architecture, and art history, we’re seeing extensive use in the digital realms. Digital skeuomorphs are actually a fairly important design element: when you can make the user interface resemble whatever you want, it can be helpful in giving the user a point of reference.

The most prevalent digital skeuomorph is probably the shutter-click that camera phones and digital cameras make when you take a photo. In film cameras, the sound was caused by a physical function. In digital devices, the sound exists solely to let you know the photo was taken in digital ones.

Of course, not everyone supports the use of skeuomorphs in this way. Apple, for instance, has begun moving away from them entirely in favor of a more simplified, streamlined design style.

Personally, I'd rather be surrounded by skeuomorphs. I think they're charming. They can really make objects seem classy and not ostentatious. I have been accused—and rather fairly—of being resistant to change…once or twice, though. Maybe more. Not counting Maggie saying it several times a week. Or all the times my doctor's said it.

I can adjust to change if I really want to. I usually just don't want to.

Oh, Yard Ramp Guy: be the change you wish to see in, er, your yard ramps:

“Yesterday I was clever, so I wanted to change the world. Today I am wise, so I am changing myself.”