Plus: Mud as a Preservative

One of my favorite museums is the Arabia Steamboat Museum in Kansas City, MO. The museum has one of the largest collections of pre-Civil War American artifacts in the world, and it's almost all from the wreck of the Arabia, a paddlewheel steamboat that sank in 1853.

The Arabia was discovered in 1987 by two families that risked everything they owned in their search. Because the Missouri river has shifted over time, they located the Arabia a half-mile away from the river. Excavation began in 1989. Mud preserved the ship almost perfectly.

Artifacts from the Arabia fill the entire museum, which is a huge place that still feels cramped from the size of the collection. The crown jewel of the museum is the actual paddle wheel and driveshaft—and not just sitting there, either. They're both kept in constant motion, though not by the original engine.

While America of the 1800s has a good claim for being the golden age of paddle boats, their use stretches much, much further back in time…and so, naturally, we travel now from Missouri to China. 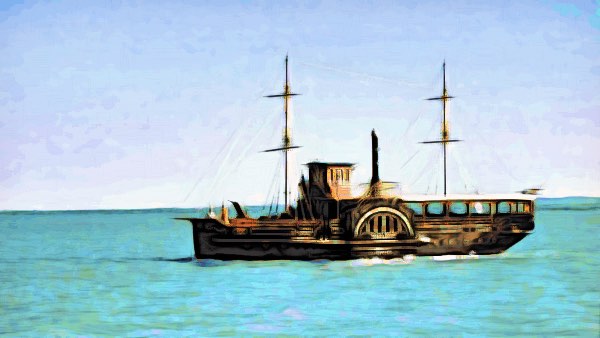 During the 1130s in China, the Son Dynasty employed heavy deployment of paddlewheel boats. They weren't steam powered, obviously, but instead driven by pedaled treadmills. Even in the 1130s, paddlewheels weren't new; they'd been in use for a long time, but Yue Fei, the Song general, took them to an entirely new level.

These river-faring paddle ships could carry hundreds of soldiers and sailors, were armor plated, were propelled by up to 24 paddle wheels, and utterly dominated the rivers. The largest of them were armed with immense derricks, capable of swinging wrecking irons against other ships and shore-mounted fortifications, along with deck-mounted trebuchets capable of firing incendiary shells and smoke bombs.

Such ships remain utterly unique in the history of the world. No other civilization has built anything like them. And these weren't the last experiment with paddle-driven warships in China. While the Mongols were besieging a pair of cities linked by a huge pontoon bridge, paddle ships were in ample use by both sides. The Chinese defenders used an immense, hundred-strong fleet of paddle ships to run the blockade, while the Mongols created paddle ships with immense circular saw blades attached to them to cut through the bridge.

This sounds absolutely like something out of a cartoon, but it really worked.

Oh, Yard Ramp Guy, paddle around this one:

“You don't paddle against the current, you paddle with it. And if you get good at it, you throw away the oars.”