A Diamond (Mine) in the Rough

The Great Wall of China isn't visible from space. That's just an urban legend. The Mir diamond mine in Siberia, however, is. 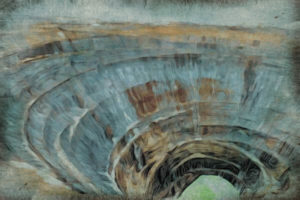 Big Hole in the Ground

The Mir mine is an open pit diamond mine that's almost a mile wide and a third of a mile deep. It was the source for nearly all of the Soviet Union's diamonds. And without it, the USSR probably never would have worked.

Not only did the Mir mine provide much needed cash to the USSR, it also provided diamonds necessary for industrial purposes, and all major nations need such diamonds for their many industries. (Remember: diamonds are necessary for many large drill bits and scouring materials.)

The Mir mine opened in 1957, operating for 44 years until its closure in 2001. Developing the mine was no picnic. It occupies ground that’s frozen seven months of the year, and it turns to slush in the brief summer.

Engineers needed to build the main processing plant on solid ground 12 miles away. Steel got so cold it would shatter, and oil would freeze. Jet engines were used by the miners to thaw the permafrost in the winter.

Still: the quality and quantity of the diamonds in the mine more than warranted these ridiculous efforts.

The mine is actually so large that helicopters can't fly safely over it. Air tends to warm in the bottom of large holes (and the Mir mine certainly counts as large). That warm air rises over the hole. It's less dense than the cold air around it, so the helicopter tends to drop quickly when it enters the air.

A helicopter pilot could probably recover from that just by increasing rotor speed, but the cool air pouring into the hole to replace the rising warm air from all sides creates extremely powerful wind shear, which will slam the helicopter into the side of the mine.

The Mir was truly a diamond in the rough.