Flooding (you with) Information 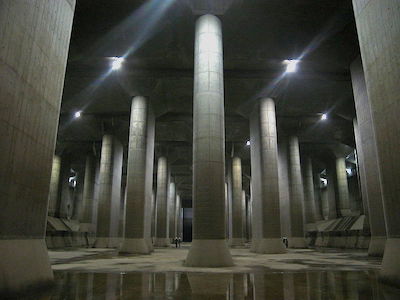 “Enormous” might be an understatement. It’s more than 25 meters high and 177 meters long. The concrete room is held up by 59 immense, 500-ton concrete pillars. In addition to the main chamber, there are five huge underground silos, each 65 meters deep and 32 m­ in diameter. You could quite literally fit Godzilla in one of those.

Construction on it began in 1992 and didn't complete until 2009. The whole thing is essentially the world's largest drain. The silos and the Temple are linked by hundreds of miles of underground pipes. The entire complex is nearly four miles across.

Tokyo has suffered from frequent floods throughout its history—not just from heavy rain, but also from typhoons and tornadoes. G-Cans was built to withstand even the most massive, once-every-other-century floods. Its 14,000 hp turbines and 78 pumps are capable of pumping more than 200 tons of water per second into the nearby Edogawa River. 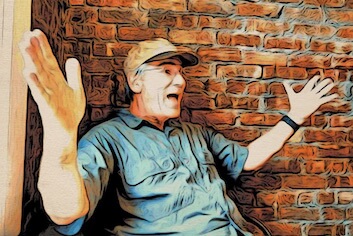 The architects and construction crew faced a number of major difficulties in the construction. Earthquake proofing was one of the biggest hurdles. Another: preventing buckling and sagging in the ground overhead as they dug out the complex; it is directly underneath a city, after all.

There was a little criticism about the steep price tag ($2 billion) and the fact that Tokyo already possessed significant flooding defenses. Still, given how prone to natural disasters the city is, I certainly think they made the right call.

So, they have the flood prevention thing covered. Of course, there are still earthquakes, volcanic eruptions, tsunamis, typhoons, Godzilla, and those horrifying giant Japanese hornets to worry about.