Or: The Vertical Vega

The second car I ever owned was a used Chevy Vega. Despite it being a complete rust pile that broke down on a monthly basis, I loved that car. (Well, it did cure me of any later desire to become a gearhead; I like cars, but that thing really took the joy out of my tinkering with fixing engines.)

I'm not here to complain about the defective axles, self-incendiary tendencies, leaky engines, backfiring, etc. I want to talk about the single coolest feature of the Vega: the way it was shipped.

These days, we're used to cars being hauled down the road by semis, but in the 70s they were hauled on railway flatcars—the longer 85- and 89-footers. They could pack 15 cars onto those tri-level racks, but it didn't even come close to the maximum weight per flatcar.

The price to move a loaded railcar from the assembly plant to the Pacific coast was about $4,800. At more than $300 per car, Chevy wanted to push that price down quite a bit.

And Chevy ended up with a pretty novel solution: shipping them vertically, nose down. They designed a specialized rack for the Vega known as the Vert-A-Pac, allowing an 89-foot flatcar to hold as many as 30 cars.

Chevy still wanted to ship them all topped off with fluids, but any normal car would leak all over the railroad. Chevy designed the Vega specifically to prevent leaks during vertical shipping. This included innovative alterations like a special engine oil baffle, battery filler caps, and a windshield wiper bottle set at a 45-degree angle.

All scrapped—vehicle and its innovative shipment method, which was repurposed.

Yes, my bias here, though I think this was one of the rare events where the way a company shipped something was much better than the thing itself. 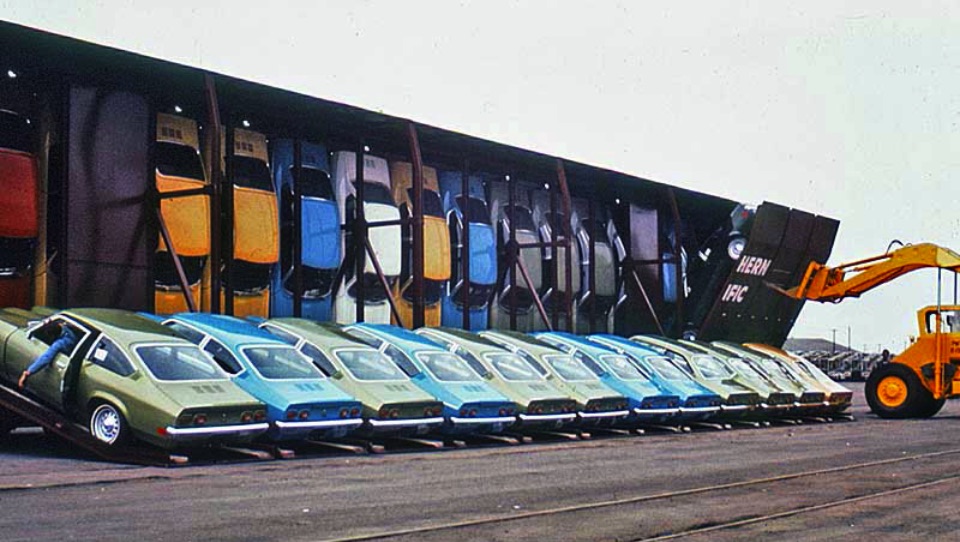