It predates almost every single construction technique we know, not to mention the writing, metal tools, the wheel, agriculture, and even animal husbandry. This is a site built when we were still hunter-gatherers. 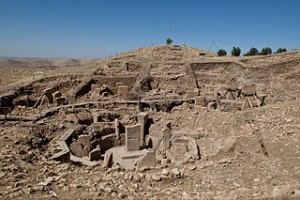 The site is largely buried. Only 5% of it is exposed, while the majority is still covered, and only known through geophysical surveys (essentially, underground sonar, though it’s more complicated than that). The site is covered with a tell, which is essentially a flat topped hill composed of disintegrated mud bricks and other building materials; the building site steadily gained in height as new constructions were built over old ones.

The site contains circles of enormous, T-shaped stone pillars fitted into sockets that are carved into bedrock. Most archaeologists believe the site to be a religious one, a burial site, or both.

One of the major conundrums regarding Göbekli Tepe is one of construction. How did a small, scattered population build a site this enormous and complicated? They didn’t have animals to haul the weights, or wheels. It seems likely that primitive versions of the techniques used to construct the Egyptian pyramids and Sumerian ziggurats were used, but it’s extremely difficult to say, since both were constructed closer to the present day than to the construction of Göbekli Tepe. It’s that old.

This has, of course, resulted in the usual ancient-aliens conspiracists coming out of the woodwork to plant their flag on more “evidence.” In actuality, it probably has more to do with the vastly different climate there at that time: it was a lush garden paradise, filled to the brim with game, fruit, nuts, and wild grains, allowing the population to concentrate their population more than other hunter gatherer sites and maintain a larger workforce.

But their specific construction techniques are still a subject of major interest to me, since this is very possibly the oldest archaeological site in existence.

Photo by Teomancimit (Own work) [CC BY-SA 3.0], via Wikimedia Commons