The history of technology we usually teach kids is a flashy one. They hear about atomic bombs, rocket ships, computers. If it’s big, shiny, explodes, is immensely expensive and difficult to create, we teach them about it. Occasionally, we might mention a really important, yet more boring one, like nitrogen fertilizers. But generally? It’s shiny objects all the way down. 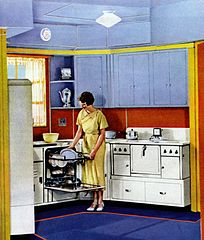 Seriously. Go in your kitchen right now, and pick up…let’s say, a rubber spatula. We’ve had rubber for much, much longer than we’ve had rubber spatulas, so why did we invent them? Well, you probably have a non-stick pan, right? Try scraping it out with a metal spatula, and you’re going to scrape off the non-stick coating. (Which, apparently, is really bad for your health.)

Or take a look at cast iron pans. They’ve got a bit of a reputation for being a little on the tough side to clean, right? Well, they used to be considerably easier to clean, but as they drifted a bit more out of popular use (though never went completely absent), a final step of the production process was dropped. They used to be sand casted, then given a strong polish, but this polishing step was dropped to save on costs, so antique cast iron is actually considerably more non-stick.