Nothing to Tibble With 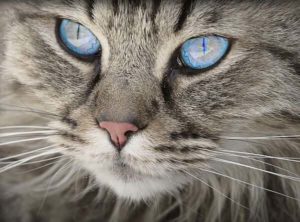 The greatest mass murderer of all time is a housecat named Tibbles.

The Stephen's Island Wren, or Lyall's Wren, was a flightless bird about the size of a sparrow that was once found throughout New Zealand. By 1894, however, it had been driven extinct everywhere but Stephen's Island. (It got over to the island during the last Ice Age, when sea levels were lower; it didn't swim there.)

And yes: it's probably not true. Most experts agree that feral cats on the island were responsible. (Though Tibbles certainly helped, and he did apparently bring lots of Lyall's Wren corpses as gifts to the lighthouse keeper.)

Only about 16-18 preserved specimens of the extinct bird (minus a few bones) are known to still exist. It seems like an evolutionary oddity. There are only four other flightless songbirds ever known to have evolved, including three other species of New Zealand Wren, and all are now extinct.

So, a few important lessons here. First, introducing cats to an area with endangered animals smaller than them is a bad idea. Second, ecosystems can be very fragile; it can only take the addition or removal of a single species to disrupt them.

Third, spay and neuter your pets.

And to anyone who thinks I'd spend all this time writing a post to complain passive-aggressively about a neighbor’s dog doing something irresponsible (again)…I have no comment.

Oh, Yard Ramp Guy: here’s a helpful quote for when your customers are trying to choose:

“Man selects on for his own good: Nature only for that of the being which she tends.”