To Climb These Mountains, You Need to Dive 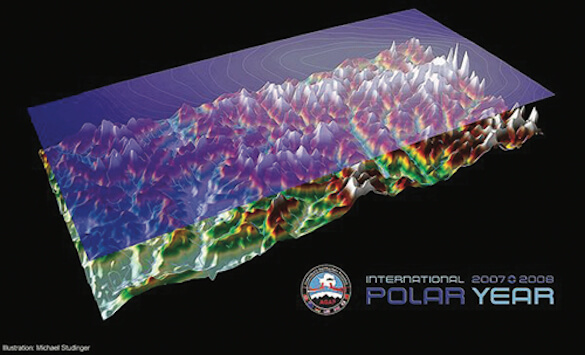 There's a mountain range on Earth that no human has ever seen.

The Gamburtsev Mountain Range is about the size of the European Alps and are as rugged as the Rocky Mountains. Why has no one ever seen the mountain range? Because it's buried underneath 10,800 feet of ice in Antarctica.

Oh, and water flows uphill there.

One of the more interesting aspects of the Gamburtsevs is the ruggedness to them. They're more than a hundred million years old. By now they should have eroded enough to resemble the Appalachians, instead of looking like the Rockies.

Scientists today think the mountain range has actually been preserved by the ice above it—a counter-intuitive result, since absolutely nothing erodes mountains faster than glacial ice in normal circumstances.

The Antarctic ice sheets are so thick, however, that the ice starts to behave in a bizarre manner. As the pressure grows stronger farther and farther down into the ice sheet, the freezing point of water starts to drop lower and lower, until liquid water eventually exists at the bottom; the freezing point of water down there is simply just too low. The pressure actually forces the water to flow uphill!

We've identified other mountain ranges that were presumably buried underneath ice sheets during the Ice Age, including the Torngat Mountains in Canada and the Scandinavian Mountains.

If the ice in Antarctica ever melts, one effect will be that the mountains (currently with an average height of 8,850 feet) would rebound upwards. Ice sheets are so heavy that they actually press the continental crust downward into the mantle.

Removing the Antarctic ice sheets would cause the Gamburtsevs to rebound back up to 10,800 feet in height.

Thankfully, we're not likely to see them any time soon. Even the worst models for global warming don't predict that rebounding scenario as extremely likely. Which is a good thing because it would raise the sea level some 200 feet.

“O, what a tangled web we weave; When first we practice to deceive!”