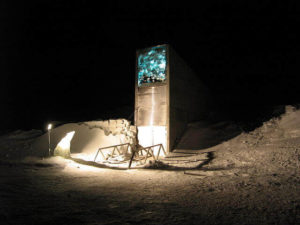 Entrance to the Svalbard Vault

For example, China has an underground network of tunnels for ferrying nuclear weapons, and the United States has a vast operations center for NORAD under Cheyenne Mountain.

One of the most secure of all these underground facilities is somewhat surprising, though. The Norwegians built it, and they use it for plants.

They constructed the Svalbard Global Seed Vault to hold a wide variety of plant seeds that are duplicate samples of seeds held in gene banks from around the world.

Its intended purpose is to provide a form of insurance: as a backup should we lose other seed gene banks or if we experience large-scale crises on a regional or global scale.

By request of the Norwegian government, the vault holds no genetically modified seeds. Engineers built the structure 390 feet inside a sandstone mountain on the Svalbard archipelago, an Arctic island chain that is one of the coldest places on the planet.

Svalbard lacks tectonic activity, ensuring the vault is safe from earthquakes. The surrounding permafrost helps keep the vault cool; even if the refrigeration units failed, it would take several weeks for the facility to rise to the surrounding sandstone's temperature, which would remain below freezing. And the bunker is 430 feet above sea level, so even if the ice caps completely melt it won't be flooded.

The vault's primary purpose isn’t to provide new seeds to a region facing a major disaster (though it can do that in a pinch). Instead, Svalbard is there to restock smaller gene banks around the world in case they've been affected by a disaster or have lost seeds to mismanagement.

It's best to think of it as a bank to which other banks can make deposits (those being the world's 1,750 other seed banks).

In fact, they're often called to do so: in 2012, the Philippines lost its entire seedbank to flooding and fire and received assistance from the Norwegian initiative.