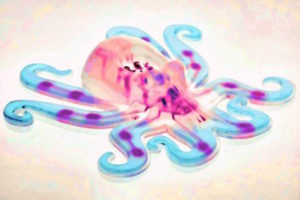 When someone talks about robots, the first thing you think of is metal. Metal limbs, gears, motors, etc. Maybe there’s a bit of plastic involved, but the basic nature of a robot is something solid, rigid, unyielding.

Even robots built to look human in fiction—androids—generally have rigid infrastructure underneath their fleshy bits. The thing is, though: none of those elements are actual requirements of robothood.

The Octobot is the first entirely soft-bodied robot in existence. This 3D-printed robot is constructed entirely without electronics or circuitry and instead relies on pneumatic logic gates. Tiny channels, grown into the material of the bot during printing, carry hydrogen peroxide throughout the body, passing through various gates and coming into contact with bits of platinum, which break down the hydrogen peroxide.

The released oxygen gas then expands and propels, moving the limbs. The current model can run for about eight minutes on a full tank. 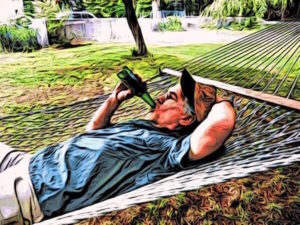 Current designs can’t do much more than wiggle around, but future Octobot designs promise the ability to move around and interact with their environments more fully.

How are these soft-bodied robots going to be used, though? We need to look to the Octobot’s inspiration for that.

Like the octopus, soft-bodied robots would possess the ability to force themselves into much smaller spaces and conditions than a normal, rigid robot.

The lack of an absolute requirement for an electrical system or a chemical power source might also present an advantage in certain conditions, though I’m sure many—if not most—future soft robots will have electrical systems and computers.

Plus, soft robots would just be fun to play with.