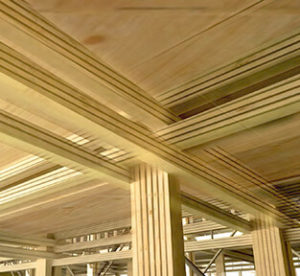 Wooden buildings are making a comeback, and in a big way. Well, make that a sort-of wood. We create cross-laminated timber (CLT) by gluing layers of parallel beams atop one another perpendicularly, forming panels that are up to six inches thick.

The panels are as comparably strong as steel. Much of this strength comes from their ability to distribute loads across the entire panel, rather than the skeletal columns used in steel constructions.

It's essentially plywood on steroids. A lot of steroids.

This isn't just an experimental material. We developed CLT in the 1990s. We’ve already used it to build multiple nine- and ten-story buildings, and we have towers up to 34 stories in the works. (Old wooden buildings were lucky to reach five stories in height.)

Their internal architecture doesn't resemble old wooden buildings, though. The design is much more similar to concrete buildings.

And the process moves considerably faster than conventional steel and concrete construction—as much as 30 percent faster than comparable buildings, and 15 percent cheaper. Much of the savings in time come from the fact that panels are usually prefabbed, and just need to be screwed together.

Fire safety is one of the usual concerns regarding building with wood, but it's not one with CLT. Yes, the timber on the outside will char, but the inside will still remain structurally sound. Steel, on the other hand, melts all the way through when it gets hot enough.

Designers and builders are not leaving things to chance, though: they usually install gypsum paneling over the CLT to further shield it from fire.

CLT is also considerably more environmentally friendly. Wood is a carbon sink—which means it absorbs more carbon than it emits as carbon dioxide. So buildings that we construct from wood serve to offset carbon emissions to the point where the building is carbon negative.

Which means that treehouses and wooden skyscrapers are actually fighting global warming.

To The Yard Ramp Guy: Would you dare quote about wood this week?

“Ultimately, literature is nothing but carpentry. With both you are working with reality, a material just as hard as wood."