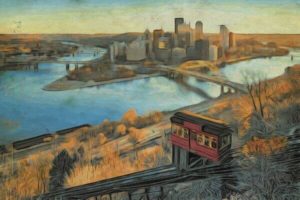 It's a Steep Slope, Sherlock

It's been a while since I've written about one of my favorite subjects. And since this started out as a blog all about ramps, it feels about time to ramp up once again.

First, a refresher course on the funicular. It’s a railway on a steep incline—often 45 degrees or more—that contain a pair of cars that are attached with a cable and that counterbalance one another. When one car moves up, the other moves down. I've written about them before (see HERE). I think they're fairly extraordinary.

The Monongahela Incline is America's oldest continually operating funicular. Located in Pittsburgh, Pennsylvania, it stretches from the flood plain of the Monongahela River up to the top of Mount Washington, a neighborhood with one of the most beautiful views in any city in America. (When the funicular was built in 1870, however, the neighborhood was known as Coal Hill.)

Around 1860, Pittsburgh's expanding industrial base began drawing German immigrants (among others) to the area. Since the industrial districts already filled up most of the flood plain, the new workers began settling on the hillsides nearby.

With few good roads and little public transit, the trek to and from work was up and down the steep and frequently muddy hill. Germany, however, had employed funiculars for some time already, so residents quickly proposed the opening of their own funicular.

A second funicular reaching the neighborhood, the Duquesne Incline, opened in 1877. Originally a cargo carrier, engineers later converted it for passenger use.

The Duquesne Incline remains open today, except for a one-year closure in the 1960s, when it was saved by a community fundraiser.

Other funiculars have been built, but only the Monongahela and Duquesne Inclines made it out of the 1960s…along with some people I know.

Yes, Yard Ramp Guy: I’ve read your comment this week regarding our not meeting at the center of our alphabetical quote-off. According to my calculations (a 1986 Texas Instruments calculator), you and I had a 50 percent chance of landing on the same letter. The problem—and the beauty—here is that we’re both of us consistent. Alas, we’re like two ships that pass in the night. Not to quote Manilow, or anything.