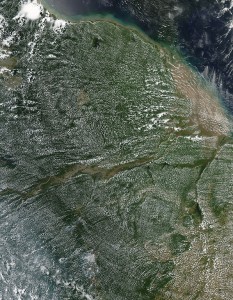 For being one of the most verdant and lush places in the world, the Amazon rainforest has some of the worst soil on the planet. It's highly infertile. In fact, sand from the Sahara desert, blowing across the Atlantic Ocean, supplies many of the nutrients it needs.

When sand becomes a source of nutrition, I’d call that a mystery.

There are large patches of dark earth—known as terra preta—scattered all over the Amazon Basin that are inexplicably fertile. In fact, terra preta contains some of the richest soils on the planet.

For years, settlers were not sure where it came from. One common idea was that terra preta was the result of volcanic ashfalls originating in the Andes mountains. Eventually, though, we figured out where that soil came from: it was man-made.

The native peoples of the region had spent centuries managing the soil carefully. To make it fertile, they added a mixture of charcoal, bone, and manure to the soil.

You've heard of slash-and-burn, right? Well, the natives used slash-and-char, which involves turning the cut down plants and trees into charcoal (hence the name) instead of just burning it. The charcoal is then mixed with the bone and manure, and then buried within the soil.

The creation of terra preta isn't just an interesting type of fertilization, either. That soil stays immensely fertile for thousands of years. Charcoal is the most important ingredient: it lowers soil acidity, can absorb and then slowly release nutrients over time, and provides habitat to important soil microbes with its porous surface.

The other ingredients are important as well…though much of this remains a mystery. Scientists still do not fully understand terra preta. They are working quite persistently at it, though. I’d say that mastering the creation of terra preta would be a vital tool in regenerating damaged soils around the world.

Yes, the Quote-Off with that other Yard Ramp Guy. En garde:

“There are dark shadows on the earth, but its lights are stronger in the contrast.”