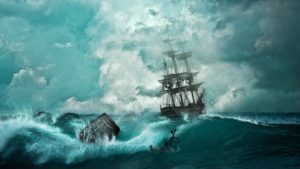 Why have we found and visited so few?

First off, there's not much of a budget or incentive. Only a small number of shipwrecks contain sunken treasure. (Bummer, as my grandkids say.) Of course, that “small number” contains an estimated $60 billion in treasure.

The main reason to look for sunken ships is for the purpose of avoiding collisions. Even if there was more of a budget, the ocean is HUGE. At maximum, we've explored 5-10% of the ocean floor. While we have a good idea about the general geology and geography of the ocean floor, our knowledge of the smaller details is surprisingly sparse.

The good news for shipwreck hunters is that the vast majority of shipwrecks are near the coast. Countless ships have sunk while entering dangerous harbors. For example, Oregon's Columbia River is guarded by the dangerous Columbia River Bar, which has sunk at least 2,000 ships since 1792. The high danger level is largely due to the fact that the Columbia doesn't have a river delta—it just pours straight into the ocean.

This is, incidentally, also the reason there isn't an abyssal trench off the Pacific Northwest Coast: The Columbia fills it with sediment. Of course, it also has buried many of the shipwrecks within it. Similar threats around the world are responsible for a huge number of the shipwrecks throughout history.

One of the main strategies for future oceanic exploration is the construction of robotic mapping vehicles, an initiative that’s being funded with competitions similar to the Ansari X Prize.

Still, I can't imagine we'll ever find even half of the shipwrecks on the ocean floor, which is much, much more massive—and much less hospitable—than all the land on earth.

“Life is a shipwreck, but we must not forget to sing in the lifeboats.”