Get a Job While Work Still Exists

NOTE: This week’s entry concludes my three-part series on the promises and perils of our new technology. The first tackled possible benefits and drawbacks of automation. The second took a long view of self-driving vehicles. 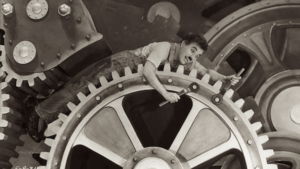 We've been hemorrhaging jobs from the economy for a while now. Word processing software put typesetters out of work in the 80s and 90s. As I mentioned in Part 1, tractors and other farm equipment have reduced the need for farm laborers by an order of magnitude—not just by sheer numbers, but also by population percentage. Mechanized logging equipment has replaced many loggers over the years. Self-checkout machines have reduced the number of retail workers grocery stores needed. The list goes on and on.

It's hard to call all of this a bad thing. For instance, it's really nice not to have to wait in long lines in grocery stores anymore. And the service industry has been successfully absorbing a lot of displaced workers up until now.

That's swiftly changing, though, as labor-saving technology grows faster than population growth or consumer demand. How can we know whether our jobs our safe?

There are four fundamental types of work:

Routine Manual: Physical tasks that can be accomplished through consistent procedures. They include construction, transportation, manufacturing, repair. (You don't always know what's wrong with a car, but you usually have a pretty straightforward set of checklists to figure it out.) These jobs are getting hit most heavily by automation. If you're in one of these, there's a very good chance that you'll be downsized in the next couple decades. Job growth rate in these fields has already been stagnant or dropping for decades.

Routine Cognitive: Mental tasks that can be accomplished through consistent, known procedures. These include sales jobs and many other office occupations. These jobs are also at risk. Many of them have already been lost to computer automation, and as that gets more efficient these jobs will become less and less necessary. They've been stagnating or dropping at almost the same rate as routine manual tasks and will likely drop almost as fast over the next few decades.

Non-routine Manual: These jobs include personal caretaking, fire and rescue, and other tasks that involve a lot of new situations that set procedures can't handle. Jobs in this category are by far the least common of the four, and they're actually on the rise. If you're in these fields, you're likely fine, and if not, moving in isn't a bad idea if you can handle the stress of them. Unfortunately, the job growth in these fields won't replace projected job losses in the first two.

Non-routine Cognitive: Includes doctors, scientists, lawyers, managers, etcetera. This is actually the largest field of the four, and it's on the rise. But it's also the toughest to get into. You basically need a college degree to get these jobs, and we all know how expensive tuition is these days, so it's not always a rosy prospect.

We face the prospect of the probability of losing many jobs over the next few years, without anything to replace them. Having huge segments of the population unemployed isn't good for individuals or for society.

So, we’ll need to figure out something, and quickly. We can hope that a new job market appears. (Unlikely.) We can try and create new jobs for people—huge public works projects or the like. Giving people obvious busy work isn't the best solution.

Most controversially, many people are talking about a Universal Basic Income: everyone in society would receive a check for an identical amount every month. Enough to survive, but not enough for luxuries, vacations, or much of an entertainment budget. If you want those things, you've got to get a job. There are a lot of potential problems with that one, and I don't see it working anytime soon. Frankly, there isn't a clear-cut solution to the problem.

What's my personal plan? Here at the cusp of retirement, I’m going to ponder all this…by going fishing.

Oh, Yard Ramp Guy—Do you see that I started this week's quotation with the letter D?

“Dare to ask questions whenever you are not clarified. Never feel too wise or too educated to learn something new from someone else or others. For, you don't know it all and you will never know it all. Yes! learning is meant to be a continuous process.”