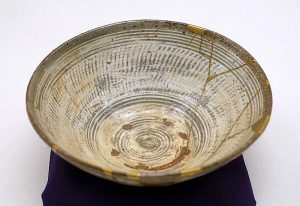 When we break a vase or a bowl, most of the time we just throw it away. We might be upset about breaking Grandma Esmeralda’s keepsake, but it's still usually going in the trash.

On the rare occasions when we try to repair it (say, under orders from Grandma Esmeralda’s daughter), we do our best to make sure that the repairs are as inconspicuous as possible.

In Japan, however, they do the complete opposite.

When a piece of Japanese ceramics breaks, they actually seal it back together with precious metal—gold, silver, or a lacquer containing powdered gold. The result is that they emphasize the breaks.

The art is known as kintsugi, which comes from a combination of kin (golden) and tsugi (repair). The fundamental philosophy of kintsugi is one that treats breaks and repairs as part of the history and essence of an object, not merely a mistake to be hidden. It's also an embracing of imperfection, which—if you ask me (or Grandma Esmerelda’s daughter)—can oftentimes be a pretty healthy attitude.

One reason this might not be as present in the West? The greater role of plastic. We use plastic constantly, and, unlike just about everything else, plastic ages terribly.

Old wood, pottery, or metal ages into beautiful antiques, but old plastic? It just looks terrible. There's no reason not to treat plastic as disposable in this sense.

The situation goes well beyond that. We've got a general culture of disposability. The huge geographical size of America means we have no problems creating huge garbage dumps wherever we want. American consumer culture demands that we keep filling our homes with the cheap stuff.

Of course, Japan isn't completely blameless in this regard. They have plenty of cheap disposable stuff they also throw away. Disposable wooden chopsticks, or waribashi, are notable offenders, resulting in massive deforestation every year.

Still: kintsugi offers us an interesting pathway toward rethinking the way we deal with the objects in our lives.