Or: Privatizing the Cosmos? 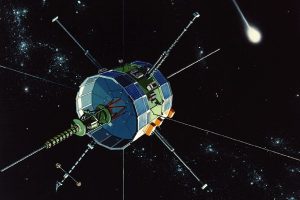 "Crowdsource me up, Scotty."

On August 12, 1978, the International Cometary Explorer (ICE) was launched into space on a heliocentric (sun-centered) orbit.

Originally launched as the International Sun/Earth Explorer 3, NASA intended ICE to investigate the solar wind and Earth's magnetic field. The unmanned probe finished that mission successfully and was then repurposed into being the first spacecraft to visit a comet. It was also the first spacecraft to maintain an orbit at the L1 Lagrange point.

So, ICE/ISEE-3 was a pretty big deal, NASA reluctantly cut contact in 1997. They made brief contact with it in 1999, just to check that it was still there. In 2008, as it happened, the probe was not only still there; the thing was still functioning. Then, in 2014, as ICE approached Earth again, NASA determined that the probe continued to function…and maybe it was possible to bring it back into operation.

NASA toyed with the idea briefly, but they ended up doing nothing (yes, it’s always easier to do nothing).

Then a remarkable thing happened: a group of interested scientists, engineers, and programmers began a grassroots attempt to bring the satellite back to life. With NASA's blessing and some assistance, they began their campaign to revive the probe.

They crowd-funded their expenses and actually began to acquire all the defunct, obsolete hardware they'd need reanimate the probe. On May 29th, the team successfully made contact with the probe.

Though they were able to fire the thrusters one time, mechanical issues prevented them from doing so again due to the loss of the nitrogen gas pressurizing the fuel tanks. They eventually lost contact on September 16th.

It seems unlikely that they'll ever regain contact. Yet this was an incredible milestone: theirs was the first crowd-sourced, crowd-funded, citizen-driven planetary space mission.

That's one heck of an achievement.