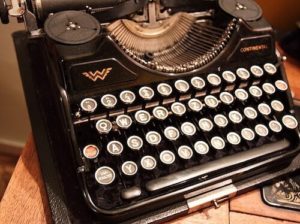 The first time I asked someone why the letters on a keyboard were positioned the way they were, I heard that it was organized in the QWERTY format to slow typists down in order to prevent the keys from jamming.

This was only a few years ago (so many topics and so much information to explore: for some reason, I'd just never wondered about it before then), and typewriters were long out of vogue. This, of course, led to the question of why the keyboard hasn’t really changed.

The standard explanation for QWERTY sticking around has to do with institutional inertia. Once an organization, company, or even nation is accustomed to using a specific system, switching over becomes much, much harder. There are retraining costs, equipment replacement costs, and plenty of people who just don't like change. (And yes, in all fairness: I'm one of them, half the time.) It's the same reason that the United States is one of the only countries to not have switched to the metric system.

There are alternatives to QWERTY, of course. Dvorak is the best known instance. Dvorak claims to gain greater accuracy and speed in typing by moving the vowels to home row and by making sure the most frequently used letters were on the right side of the keyboard, among other changes.

Well, it turns out that the whole QWERTY origin story was actually wrong. Typewriter design flaws weren't responsible for the QWERTY keyboard layout. In fact, it was actually designed to be more efficient for telegraph operators—the letter positions were arranged to work better for the particular quirks of Morse code, stretching back to the very first mass marketed typewriter.

What about Dvorak? Well, it does seem to provide a small typing speed advantage…but not a significant one. It turns out that most of the studies about Dvorak were pretty poorly run; Dr. August Dvorak, the Dvorak’s creator ran the most famous study—yes, it showed the Dvorak in an extremely positive light.

And the small typing speed advantage it offers certainly doesn't counterbalance the literal billions it would cost to retool the computers in America alone.

Anyway, if we were really that worried about faster typing speed, we'd just switch to stenography instead, which more than triples the speed of Dvorak or QWERTY.

No offense to Dvorak or stenography, but I'll stick to the keyboard that came with my computer.

Okay, (other) Yard Ramp Guy. Question it all, my friend:

“Quality is never an accident; it is always the result of intelligent effort.”