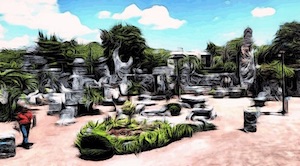 28 Years in the Making

Eccentrics building bizarre monuments is somewhat old hat, but Edward Leedskalnin took it a little farther than most.

The Coral Castle, located in Southern Florida, is a bizarre complex of limestone megaliths. Each stone weighs several tons.

Leedskalnin spent more than 28 years building the coral castle, and he allowed no one to watch him work. He claimed that the only tool he used was a “perpetual motion holder,” whatever that is.

His eccentricities don't stop there. He claimed that magnets cured him of tuberculosis. When asked how he built the castle, he would only answer, “It's not difficult if you know how.”

The “castle” itself is constructed of a thousand tons of oolitic limestone, which comes from coral. The joints of the stones use no mortar; all of the structures are held together by their weight alone. The whole thing is surrounded by a wall of eight-foot tall standing stones, which Hurricane Andrew didn’t even shift in 1992.

Leedskalnin himself lived in a two-story tower near the center of the maze. Other structures on the site include a sundial, fountains, obelisks, and countless pieces of stone furniture. The largest stone weighs 27 tons, and the largest monoliths top 25 feet.

Coral Castle’s most famous structure is the revolving gate: an eight-ton structure that a child could push open with a finger. The gate had to be removed for repairs in the 80s, when it was discovered that Leedskalnin had drilled a hole through the middle and put a metal shaft connected to a truck bearing through it. The repaired gate, unfortunately, doesn't open quite as easily.

Edward Leedskalnin once claimed that he had discovered the secrets of the pyramids. This actually might not be too far off. Archaeologists and engineers have come to find that the Egyptians used incredibly clever engineering techniques to accomplish their constructions with relatively small workforces.

All the stories about the eccentric using strange powers have been debunked. Though he was highly secretive, a few people did witness his construction techniques, which were as mundane—though clever—as they come. Still, though, it's pretty cool stuff.

Yes Yard Ramp Guy: Onward and backward with our quote-off. Xcellent, I say.

— Lots of people, including pirates, Indiana Jones, and me.