One Way to Save on Airfare to China

Little kids try to dig to China all the time—regardless what’s actually on the other side of the world from them—and, well, they never get very far—because…

It’s dinnertime, or they bust a pipe and flood the basement, or mom comes out and tells them they can’t go because your passport is outdated and you’ll get tossed in jail and just wait till your father gets home, and when dad gets home he stares at them with a look that’ll keep‘em local for at least 12 more years.

And now that I’ve covered parenting tips and travails for the moment, what's the actual deepest hole ever dug? 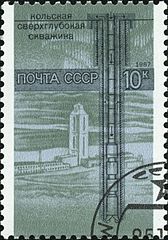 The Kola Superdeep Borehole, on the Kola Peninsula in northern Russia, reaches a depth of 40,230 feet. That’s more than seven and a half miles, far deeper than even the deepest point in any ocean. Started by the Soviet Union in 1970, it held the record for deepest borehole for decades.

Though longer boreholes have since been drilled, largely for oil related purposes, the Kola Superdeep Borehole remains the deepest point on Earth. During its lifespan it contributed immensely to scientific understanding.

Work on the borehole shut down in 2005, due to lack of funding. Oh, and though the hole is still there, you can't fall into it: along with being sealed with a thick metal cap, it's too thin to accommodate a human.

Even though that project has ended, it's not the only one of its type.

The Chikyū, a Japanese scientific vessel, is a drilling ship designed to drill miles below the seafloor. While that won't likely ever reach the extreme depths of the Kola Superdeep Borehole, its data is much more scientifically interesting, through drilling into more seismically active regions where the crust is much thinner. The Chikyū might actually be able to reach the upper layers of the mantle.

(Fun fact: the boundary between the crust and the mantle is known as the Mohorovičić Discontinuity, though most geologists just call it the Moho.)

Why is it important to dig all of these holes? Well, apart from giving us a richer understanding of the Earth’s history, (which should be important enough on its own), we also gain more knowledge of continental drift, volcanism, rock formations, and mineral deposit locations.

That’s why we can thank all those who started digging those holes to China as kids, got interrupted by their meddling parents, and then returned to the dig after college. The way I see it: if the parents had only let their kids have at it, they would’ve saved a fortune on tuition.