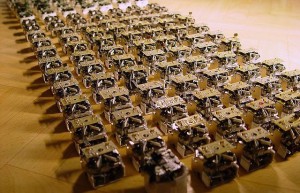 Amazon has more than 15,000 of these robots in their warehouses right now, processing a majority of the orders. Establishing a testing a system for a warehouse can take quite a while, sometimes months. Amazon's engineers have to assure that the army of robots on the warehouse floor can move about without running into one another and toppling shelves over left and right, which is no easy task.

Surprisingly enough, the Kiva robots haven't resulted in job losses. Instead, the workers move from the picking-and-sorting jobs to train in other positions. In this scenario, when more robots are added, more work is created for the human workers. Seemingly: everybody wins. Plus, as anyone who has ever worked in a warehouse can easily attest, picking is a job tailor-made for robots.