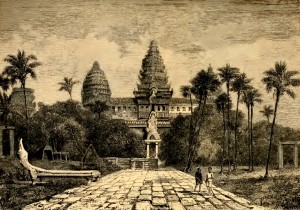 India, however, has an architectural philosophy called Vastu Shastra. Rather than a rigid design philosophy telling you to do this and then do that, it's more a set of guidelines to help with maximizing space, sunlight, and movement within the space, while adding in Hindu and Buddhist beliefs. This all is characterized by square mandalas, which are very distinctive grid-like shapes.

One theory holds that they developed Vastu Shastra as far back as 8,000 years ago; many ancient Indian archaeological sites conform to its design principals. It’s been in continual practice ever since, though it was ignored by a lot of architects during the British rule of India. As soon as the British got the boot, though, Vastu Shastra quickly started regaining its popularity.

Part of the reason Vastu Shastra has remained in use for so long is its flexibility. The design matrix allows for adaptation: with new building materials, in more crowded areas, and in non-square spaces. We’ve seen a major resurgence of Vastu Shastra in modern times—among both architects and homeowners in India—and its concepts are spreading all around the world.

Too often, people look at architecture, comment about how exotic it looks, and then just dismiss it as a novelty. People don't build like that, though. There is a philosophy behind every piece of architecture in history.